Nijmegen is a medium-sized city that is situated on the banks of the river Waal. In order to connect the city with nearby municipalities and suburbs, such as Lent, a bridge designed to facilitate cyclists and pedestrians was secured to the pre-existing railway bridge.

The bicycle viaducts, which form a bicycle path that has a total length of approximately 2 kilometres and runs all the way from the Stieltjesstraat in Nijmegen to the Griftdijk Noord in Lent, were positioned adjacent to both sides of the railway bridge over the Spiegelwaal. The bridge provides a fast connection between the city centre of Nijmegen and the newly-built neighbourhoods in the Waalsprong. On average, using the Snelbinder instead of travelling via the Waalbrug will shave at least 10 minutes off the travel time. 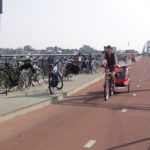 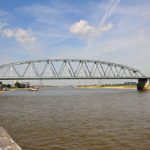 Installed and secured in one day

Rather than being constructed on site, the Snelbinder was built on a platform on the north short of the Waal, shipped to its final destination, and then attached to the railway bridge. It was installed and secured in the span of one day, which required a temporary shutdown of the railway. It took several weeks to add all the finishing touches and to make the bridge fully operational.