In the Netherlands and Belgium, bicycle routes are connected to each other via a so-called cycle node network. This network makes cycling longer distances both easy and as straightforward as possible. While the Netherlands is famed for its sophisticated bicycle infrastructure, the idea of creating a node network was actually conceived in the Belgian province of Limburg and later adopted by the Dutch.

The node network originated as a result of the need for a new way of signposting the existing bicycle routes and has been rolled out through most major provinces of Belgium and in all the provinces of the Netherlands. The system is often referred to as a bicycle route network, bicycle network or bicycle nodes network.

Planning and following a simple itinerary

Cyclists can cycle a route by following the white and green rectangular signs from one numbered intersection to the next. This system was devised to make it easier to plan and follow a cycle itinerary. 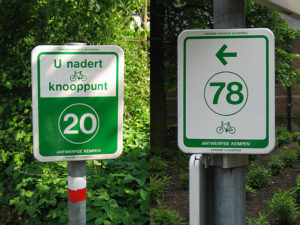 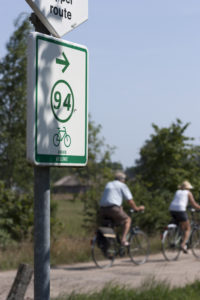 How do the cycle nodes work?

There are approximately 8900 cycle nodes in the Netherlands: each individual node has a number between 1 and 99 and is clearly signposted along bicycle paths. These signs at these junction nodes show the name of the network and the cycle route and display directional arrows at and between the various junction nodes that denote how to proceed to nearby nodes. Using this system, cyclists can either follow an existing route or devise one of their own by simply making a list of the nodes they wish to explore.